I’m delighted that Peg Alford Pursell (http://www.pegalfordpursell.com/) invitedme to talk about what I’m working on. She is the tireless founder and curator of Why There are Words, named Best of the Bay in 2012.  In an age where bookstore readings are on the decline, Why There are Words (held in a Sausalito art gallery) recaptures a time when bookstore readings were lively, warm, and packed with people. She’s also a fine writer (you can read some of her stories online) and is working on a prodigious novel, callled Blow the House Down.

Talking about “the next big thing” is challenging for some writers, and I’m certainly one of them. I prefer to work in silence. Like the most fragile seeds of plants, my stories grow in the dark. (Yuvi Zalkow has made me nail this a little bit in his recent interview in The Rumpus (http://tinyurl.com/cmweoqy).  Still, I find it challenging to talk about the unspeakable, and so I’m going to talk about my next novel–as much as the characters will let me.   Here goes:

What is your working title of your book (or story)?

The working title is Light and Transient Causes. I may not use it for the book, but it’s clinging to me and says something to me right now. (I heard it on the fourth of July in a small town, where someone was reading The Declaration of Independence and it leapt out as ironic, hopeful–about causes so light the sun shone through them.)   However, other titles also are auditioning.

Where did the idea come from for the book?

It’s very hard for me to know where my ideas come from.  I seem to be hanging out at the pneumatic tube of the imagination when no one else is and I get an assignment.  Usually it’s in the form of a passage, a phrase, or a title. .  (The key passage I wrote from Heidegger’s Glasses took me sixteen years to understand.  And I understood it when the title Heidegger’s Glasses came to me. ) I can’t say much now, except that I like to put my characters in unfamiliar locations–places you know about and have seen but can’t identify.  I also like to put my characters against a backdrop of political unrest so they are dealing with a common cause, as well as interpersonal struggles.  Last, I would say that I’m fascinated by the issue of identity.  What is it?  What makes one sure of who one is?
What genre does your book fall under?
It’s literary fiction and I’m going to borrow Karen E. Bender’s explanation (she’s going to blog next week). “Literary fiction is fiction that I hope illuminates a reader’s own unique, perhaps unthinkable,
thoughts.  I’d also add that I’m interested in fiction that broadens a reader’s sense of other lives–how they are and aren’t like our own.
Which actors would you choose to play your characters in a movie rendition?
,I would choose Sarah Polley (after seeing her in The Secret Life of Words I know she can act!)
Phillip Seymour Hoffman and Javier Bardem. I would look for any one of a number of actors in
Spanish speaking countries and would want some of the movie to be in subtitles.
What is the one-sentence synopsis of your book?
I can’t speak for the book at this stage!
Will your book be self-published or represented by an agency?
I’m represented by the Diana Finch Agency
How long did it take you to write the first draft of your manuscript?
A year with breaks to do book tours for my short story collection, Enchantment. .
What other books would you compare this  story to your genre?
That’s not a question the book can answer yet.  My last novel was compared the The White Hotel but that never occurred to me.
Who or what inspired you to write this book? ?
As I said, I don’t know what inspires me. I give a great deal of credit to the mysterious wisdom of the imagination–and also to everything that’s ever happened in my life, ranging from hearing radiators rattle on cold New York mornings to having a child.  When I get an idea–through a title, an image, or  a passage–I don’t try to understand it. Eventually, I can tell if it’s growing in the silence and the dark
That is—I begin to hear things, or read things, or see things, and start to think “That can go in the book,” even thought I haven’t decided to write a book. And at some point I have a lot of material  in fragments and I want to put them together to see how they fit and what other pieces are needed.When I feel driven about completing that puzzle, I know I’m writing a book.
What else about your book might pique the reader’s interest?
Often what readers notice and like is startling and original , as though they’re writting the story in their own imaginations. So it sort of feels like hubris to talk in advance about what a reader will like. It’s more exciting to let the reader make the discoveries.
Coming up next Tuesday, February:  Three wonderful writers talking about a work in progress, Edie Meidav, Anne-E Wood, and Karen Bender.  They will ALL publish on this site.
,
Karen E. Bender will talk about her novel, A Town of Empty Rooms, out January 15th with Counterpoint Press.  lt got rave reviews from The Boston Globe, Publisher’s Weekly, Booklist, and Kirkus, among others.
Edie Meidave has written a number of highly-regarded books, including Crawl Space, The Far Field of Ceylon, and Lola, California, which is coming out this summer with Picador. Edie will blog about her next work.
Anne-E Wood, a sparkling story writer from Brooklyn, who’s  written Two If By Sea and  publishes in Agni, Tin House, The Chicago Quarterly–among many others.  Anne-E will talk about her.upcoming novel.
Please visit us again!.

What would you like to see in a blog?

What makes your eyes glaze over?

Would you–as a reader—like to contribute more to a blog? e.g. be interviewed on a theme?

It’s hard to write a story in 53 words, but it can be done.  This week is a story that take place in an empty attic and the judge is moi.  Take a look at http://tinyurl.com/b9c7kuq

I’m writing a 53-word story today and will post it later.

The story took me two days!

If you want to read more about the beneifts of working with restrictions and a limited palette, take a look at a column I wrote at Red Room. 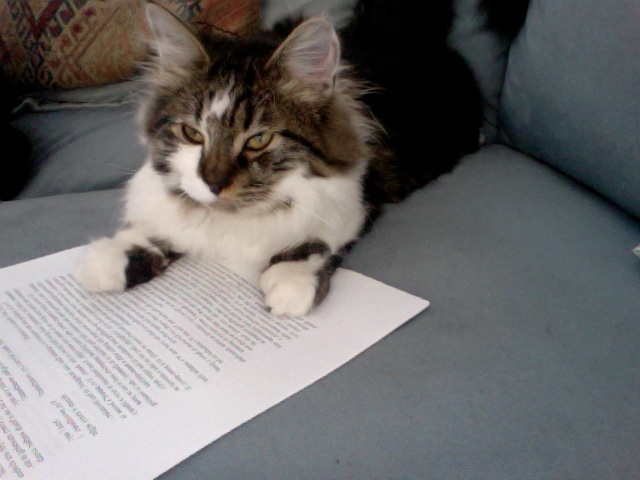 Like some of you, I have surfed the rogue galleries of dating sites.  Sometimes I find people so poignant and interesting, I think about them as characters. Round chararacters–in the sense that the reader lives inside their lives and hearts. There are also flat characters—the stereotypes of Dickens’ London, translated into 21st century cyber-people.

2.  The Outdoors Contingent:  Men in helmets on skis next to motorcycles laden with golf clubs.   Women in pink pants playing tennis on roller skates next to a racing car. Men and women with camping gear whose faces are partly hidden by backpacks, bedrolls, and necklaces of water bottles.

3. The Music Contingent:. Men bending over guitars.  Women obscured behind mikes.  People in bands who look like at least one other person in the band.

5.  The God and Goddess Contingent. People with pendants, amulets, and a great admiration of The Secret.

6. The Natural Habitat Contingent. People photographed next to their televisions with puce drapes and a cactus plant in the background. Or: in elegant living rooms with white sofas, fine art and glass tables.

7. The Costume Contingent. People wearing Renaissance capes and brandishing dueling swords or wearing nothing but pasted feathers for Carnival.

8. The Nature Contingent: People photographed on top of mountains, in meadows, or oceans, their faces distant against extraordinary vistas.

9. The Writer Contingent: People who identify with the souls of famous writers and poets.

Since I’m a writer, the last contingent interests me most and I’ve collected  some profiles and rewritten them with disguises. Here are four, with one commentary:

Exhibit A: Even though I was the first CEO gal in my company, I feel closest to Rumi.  With my long hair flying, and my briefcase banging against my athletic body, I still am on the edge of the roof  making love with the Beloved under water.

Exhibit B: I move and sit and walk like a twenty-something from climbing and surfing and loving the outdoors—the spirit of the Hardy Boys with the soul of Tolstoy in the body of an underpants model.

Exhibit C: I’m a computer-progammer and love to golf;  but I feel closest in spirit to Jane Austen because she understood that  timing is everything. Of course I want to meet a lady who plays golf, too, but she also should appreciate the man who waits for just the right moment to linger at her office cubicle.

Exhibit D: I have worked as an actress, singer, and songwriter and my friends consider me attractive. But I found my calling when I started to be a life coach for people with dogs who were too high-strung to handle normal training school. I feel closest to John Steinbeck. It isn’t just about  Travels with Charley.

Sometimes I wonder how these writers would feel if they saw their spirits invoked and read the ads. I imagine Rumi–after a period of confusion–would write a poem about cyber-union. Jane Austen–once educated about cyberspace–would write a satire.

Steinbeck would be saddened—cyber-realism isn’t his thing.

I mostly worry about Tolstsoy, who  died of pneumonia at the Astapovo railway station at age 82, after deciding to leave his family and become a wandering ascetic. He had ended a claustrophobic relationship with his wife by sharing his journal with Chertkov, a much younger man, and preached for all kinds of causes.  He probably would understand that cyberspace could be a great podium for his ideas and even a new book– if only he could get out of his current persona. I think he would have cried out in the voice of his cyber-double:

Please help me! I am a 19th centuy epic writer from Russia trapped in the 21st century body of something called an underpants model.  Instead of a rustic life outside of Moscow I have to race all over New York City to big buildings. When I get there they fit me with a strap that makes my entire privates look enormous and after that they put on something tight-fitting that still exposes my chest and legs. Then I am forced to stand many hours under lights, and after that I go to a place called a gym with machines, always perspiring, not understanding the language of my trainer. Then I have to go to dark caverns called clubs where there’s no good vodka to speak of. I’m never able to write and someone stole my Bible on the subway. They won’t let me grow my beard and no one listens when I talk about pacifism, acesitism, poverty and denial of the will.

I know it’s all the fault of a certain man who wants  women to make love to him and I am outraged that he invoked my name along with the words “underpants model.”   How will I live with this epithet?  Or is it a living proof of the great Buddhist and Hindu philosophies of denial of the will? 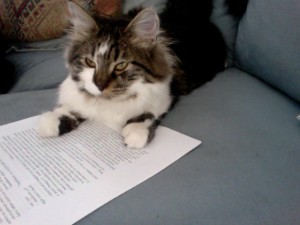